A few months back the Canadian Avalanche Association sent around a set of KML files showing avalanche terrain analysis of  some popular backcountry ski and snowmobile areas in British Columbia. These files rate the terrain according to the Avalanche Terrain Exposure Scale (ATES) in terms of simple, challenging or complex – terms intended to indicate the level of exposure to avalanche risk from terrain factors alone.

An approach to avalanche terrain analysis which is thought of by many GIS students in their first year or so is to take the simple fact that most avalanches happen when the angle of the terrain is between 25 and 45 degrees and show a map of where the terrain has this slope. However, this is a very simplistic approach that does not take into account many of the other factors involved. I don’t mean to say that GIS tools can’t do terrain analysis, but that they are intended to assist a human and not to replace the expertise of an avalanche expert, at least not yet.

The ATES scale and the factors that are included in the model are quite complex and aren’t a simple matter of terrain, but of altitude, aspect, elevation, exposure (to wind & sun), roughness of terrain and the presence or absence of anchors (trees, boulders), and terrain traps, to name just a the broad categories.

The KML files produced by the Avalanche Association are the result of expert analysis by people familiar with the area.

However, the major free KML reading tool is Google Earth, and as I’ve written before, Google Earth is not a map (although it’s possible to include features to make it into a map), and is very hard to use for navigation and planning beyond showing you the satellite photos. They are also hard to print, and hard to read in the field.

Which is where TrueNorth comes in; by importing the KML files produced by the Avalanche association, overlaying them on topographic data, and including a UTM navigation grid, we can make these “view only” files into a true planning resource. 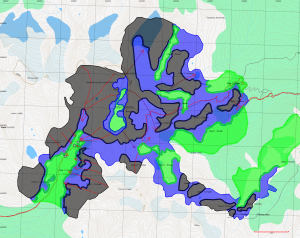 The above example is a result of a rough import of the KML file with colours and transparency as chosen by the CAA and no editing.

Printing this map at approximately 1:50,000 gives you a resource you can take into the field with you.

Even better, plotting a track on this map, and downloading it you your GPS gives you a digital copy you can use for navigation.

A PDF version of the above is included below.