How do you plan an 1800 km backcountry ski trip?

We have no idea. The longest backcountry ski trip the TrueNorth team has done is eleven days.

However, what we do know is that any backcountry trip, of any length, needs a map. In this case, more than 100!. 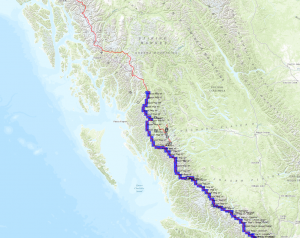 The Traverse the Coast Route

When we heard about the Traverse the Coast (TTC) expedition, and their plan to do a ski traverse of the entire Coast Range from Vancouver, BC to Skagway, Alaska, TrueNorth Geospatial contacted the team and offered our software to produce the maps for the over 1800 km ski tip.

It so happens that the team was in the process of acquiring maps. Our meetings with TTC member Erica Madison and discussion with Ryan Bougie came to the consensus that the team required maps on legal sized paper for portability, with several larger ones for areas where some significant exploration would take place.

The TTC team provided us with their complete route as a Google Earth KML file. They needed something better for navigation which included the UTM grid, declination, scale bars, and topographic information, and our map printing fit the bill perfectly. Since the route traverses close to the Canada/US border near Alaska, we chose a combination of the GeoGratis data set and several online sets. When overlaid on each other these provided an almost seamless coverage showing significant roads, contours, tree coverage, and glaciation in both the US and Canada.

A template  was produced which consisted of the geographic footprint of a legal-sized map at 1:50,000. The footprint was arranged along the primary and several alternate routes, and positioned carefully to cover the route and as much area nearby as practical in order to give the team a good idea of several kilometres on either side. An example of the marked up route with templates placed is below.

Once the map footprints were placed, we wrote a script to iterate through them, and print reports for each one, exporting it to PDF. The PDFs were uploaded and printed professionally, and were ready for pick-up in a number of hours. In total, 99 legal sized 1:20,000 scale maps and two ledger sized 1:100,00 scale were produced, just for the cost of printing.

In the words of team member Erica Madison, who has some familiarity with GIS systems in her job in Alaska “That was a lot easier than I was expecting”.

While we haven’t asked the Traverse the Coast team how they are doing, you can follow along for yourself on their blog. At last update, the team was in the Mount Waddington area (see map embedded below). This puts them on Map 16 of about 100, and well on their way. We wish them good weather and good fortune on their trip!