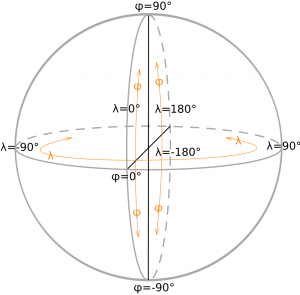 Latitude and Longitude on the sphere

Take a look at the following list of coordinates:

What do they have in common?

The answer is that they all represent the same location.

There are many reasons why there are different ways to write a coordinate for the same location.

One reason is that there are many  coordinate systems; for example the Geographic Coordinate System (latitude and longitude), or Universal Transverse Mercator (UTM). But even using geographic, there’s still many ways to write that coordinate.

Of the 7 ways I’ve show above, none of them are UTM, which looks like this:

One of the main reasons is that it’s really difficult to write the “degrees” symbol on a computer. I can do it, but it takes quite a few clicks to get it right:

So people tend to use shortcuts. Some use a colon because degrees are like hours on a clock, followed by minutes and seconds. We call that “time format”. It’s traditional to write “northing” followed by “easting,” and it’s possible to represent southern and eastern coordinates using a negative sign, so you have to be prepared to handle those variations.

Finally, there’s some debate about decimal degrees, decimal minutes  and decimal seconds.  These three variations cause the most trouble because translating between them involves conversions from base 60 which is almost impossible to do in your head. Each one has it’s uses, so it’s possible you could be one of those people who is most used to that format.

Thankfully, we have computers to do the “heavy lifting.”

When I was working on TrueNorth, I came across the problem of how to let a user type in a coordinate. After some thought I realized that whatever system I chose, I would be making someone unhappy. So why make the user choose? Let the computer do the work.

I took some time, and wrote a geographic library that could handle all of the coordinate systems listed above, and a few more besides.

The result is that any input box that accepts a coordinate in TrueNorth can handle any way of typing a geographic coordinate you care to mention. This includes copying and pasting something with the “degree” symbol, coordinates separated by a comma, those that have “N” and “S”, or a sign, and decimals in any of the degrees, minutes or seconds.

Similarly, for output, TrueNorth let’s you display coordinates in many different ways. We’ve found that a user may need to see a coordinate in one format, they may need to quickly change formats in order to talk to a user from a different background, or someone using different tools that aren’t quite as easy to use.